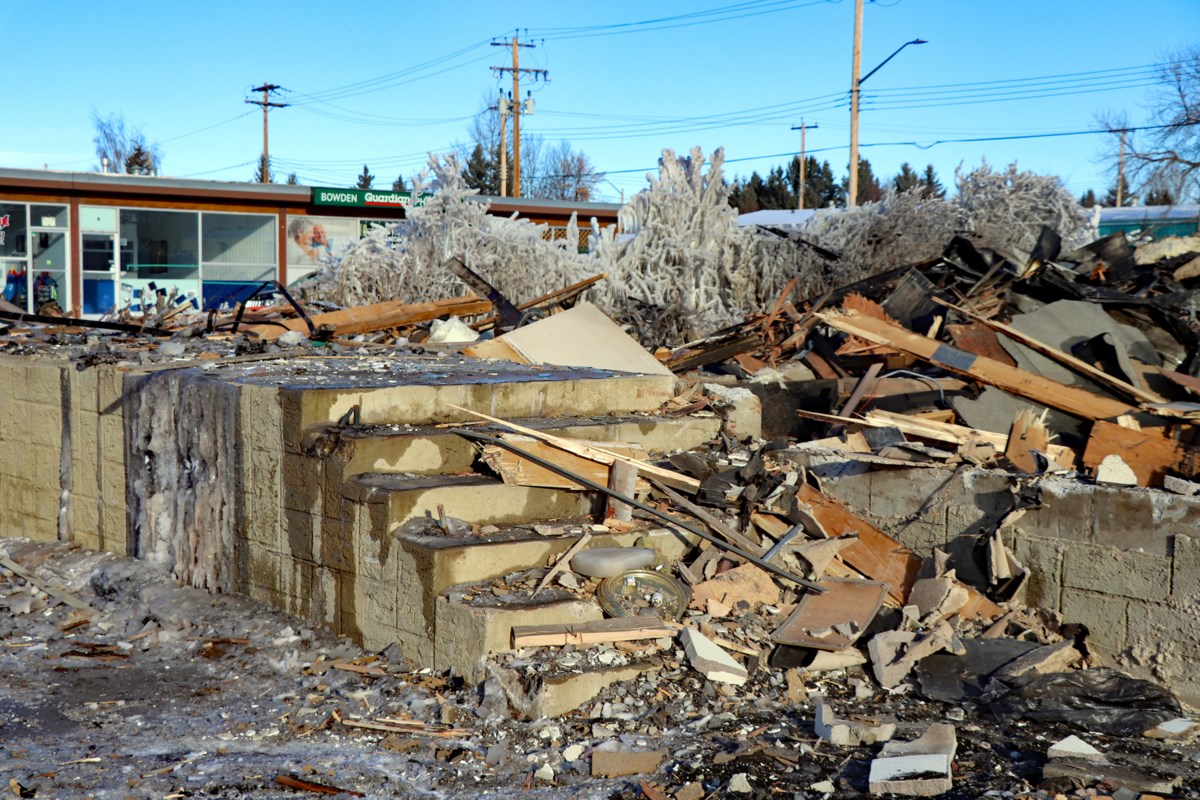 The future of Bowden Hotel ownership in limbo

BOWDEN — The City Council is in limbo over the ownership of the Bowden Hotel pending the outcome of investigations into a fire that destroyed the building, Mayor Robb Stuart said.

The hotel, which stood for decades at the corner of Highways 2A and 20and Avenue, caught fire on New Year’s Day, just after midnight.

Fire crews from Olds, Innisfail and Red Deer County battled the blaze for approximately 15 hours, but were unable to save it.

During an interview with The AlbertanStuart said RCMP and Red Deer County officials are still investigating the fire.

General manager Greg Skotheim told the January 10 council meeting that he was getting a quote for demolishing the hotel’s remaining rubble from a contractor. He then intends to obtain bids from other interested firms.

He suggested that the municipality may need to consider the costs associated with the Bowden Hotel when developing its 2022 budget in the weeks and months to come, in case it has to incur certain costs.

“It’s going to be a hazard. Maybe it’s something we talk about budget-wise and decide where we’re going to go,” Skotheim said.

“Maybe we clean it up and then ask the government for funding.”

Some councilors wondered if the demolition quotes would include the restaurant building just east of the hotel site.

Stuart said it was a possibility, but it was quite complicated, as city officials were unsure who owned the hotel and therefore had title to it and whether that title extended to the restaurant. .

He said the council had been trying for 10 or 12 years to find out who owned the hotel.

“So until we know that, we can get all the quotes we want, but nothing will happen until we know exactly what we’re doing,” he said.

“I met the province when the NDP ran it. They took away their privilege. But since then nothing has been done. We are still trying to find out who owns it. We know that the CRA, Revenue Canada, has a lien on that.

“I hope you all know we had a fire,” Skotheim said as he introduced the topic at the Jan. 10 meeting, prompting big laughs.

“I saw that,” the adviser said. said Sandy Gamble, drawing even more laughter.

Gamble said she felt bad for everyone fighting the fire because it was extremely cold that night and the next day.

Bowden town officials wrote a letter of thanks to everyone involved in the firefighting, including Menno Sietzema, a town public works supervisor, “just thanking them for a wonderful job”, did he declare.

“Everything was safe and it worked well,” he added.

Skotheim said a fence erected around the site to keep people safe appears to be doing its job, although some people are still looking for memorabilia from the building.

“I think unfortunately we are doing all the right things at this point. That’s all we can do,” the adviser said. said Wayne Milaney.