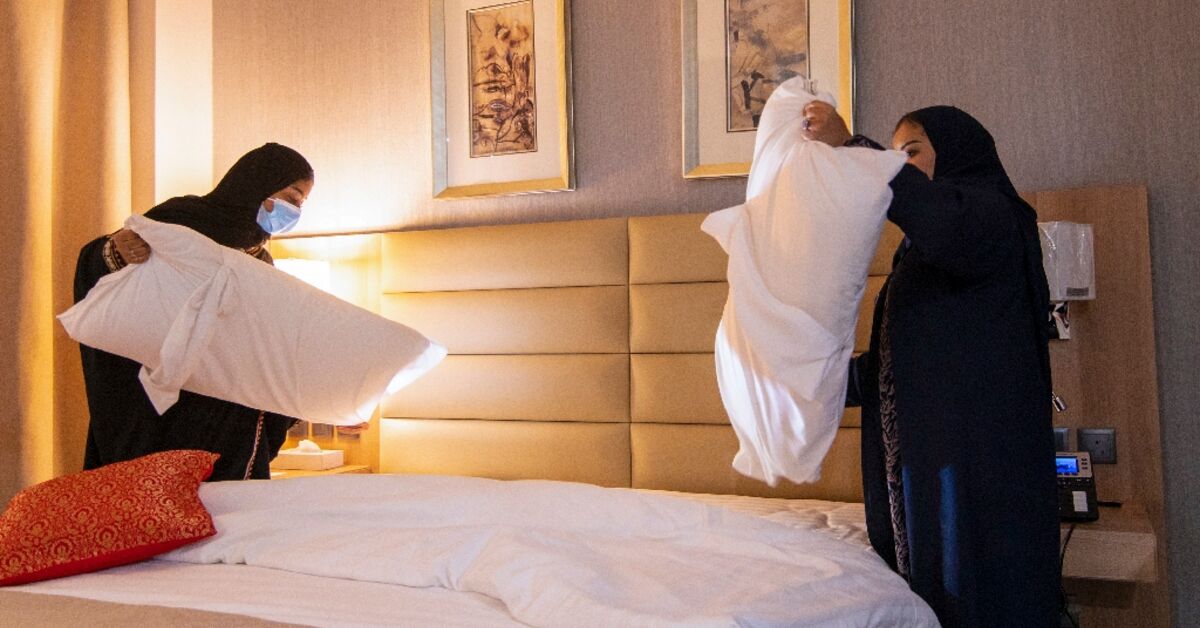 Under the watchful eye of an instructor, Munira al-Rubaian hangs fresh bed linen in a fake hotel room in the Saudi capital, in a bid to land a job in the desert kingdom’s booming tourism sector .

The unemployed 25-year-old is one of thousands of Saudis enrolled in the state’s Tourism Pioneers program, which aims to prepare 100,000 job seekers for a field that government officials say is on the verge of taking off.

Others are sent abroad to take short courses in countries with much more advanced tourist industries, including the Netherlands, Spain, Switzerland and France.

This newly minted army of bellhops, cleaners and hotel managers should help Saudi Arabia – a reputedly conservative and closed Gulf kingdom that only opened its doors to tourism three years ago – to make a positive impression. on first- time visitors.

The niqab-wearing Rubaian signed up for Tourism Pioneers after her own efforts to find a job at a hotel came to nothing.

She is optimistic that the experience will help her get her foot in the door.

“I had the opportunity to learn and improve my abilities for the job,” she told AFP.

“I will now have the experience and confidence to deal with people.”

Crown Prince Mohammed bin Salman, the 37-year-old de facto ruler of Saudi Arabia, is counting on a tourism boom to diversify the economy of the world’s biggest oil exporter.

In 2019, two years after Prince Mohammed became the first to ascend the throne, the country introduced tourist visas, but the coronavirus pandemic dashed hopes of an immediate influx.

The authorities nevertheless remain committed to their staggering goal of attracting 30 million foreign visitors a year by 2030, compared to just 4 million last year.

This is in addition to the 70 million domestic trips targeted each year by Saudis and foreign residents.

The rest, officials hope, will be fueled in part by new attractions like Al-Ula, a budding arts center set among ancient Nabataean tombs, and the Red Sea Project, a Maldives-style resort destination.

But while the kingdom has in recent years relaxed rules banning cinemas, co-ed concerts and sporting events, other regulations, including an alcohol ban, remain in place that could hurt its appeal.

In a bid to attract more Arab tourists and better compete with regional rivals like the United Arab Emirates, the tourism ministry announced last week that residents of the Gulf Cooperation Council could apply for e-tourism visas.

This right has already been granted to 49 countries, mainly in Europe and North America.

To make their dreams a reality, Saudi leaders recognize the need to dramatically increase the number of people working in tourism.

Some 850,000 people currently work in the sector, only 26% of whom are Saudis, according to official figures.

Prince Mohammed’s Vision 2030 reform program aims to create one million new jobs in tourism and increase the proportion of Saudis working in them to 70%.

Tourism Pioneers, launched in June, has a budget of $100 million, with programs for 52 specific jobs, from entry level to management.

“We need to develop the knowledge, skills, competencies of Saudis to the highest level,” said Mohammed Bushnag, deputy minister of tourism in charge of human capital development.

Al-Waleed al-Zaidi, who works as a sales manager in Riyadh for a foreign hotel chain, visited Switzerland for a week-long course and got a taste of what it’s like to serve travelers leisure – quite a different challenge from the corporate clientele to which he is accustomed.

Instead of questions about dry cleaning services and international call rates, she was asked for recommendations on attractions and how best to use public transport.

The experience “opened up my understanding of the different needs of tourists in terms of activities, food and places they would like to visit,” he said.

For Bushnag, this type of education will enable Saudis to provide a high level of service.

“We are extremely concerned about the quality and global exposure of Saudis” who have so far seen little of the operation of other countries’ tourism industries, he said.

“We have to close this gap.”