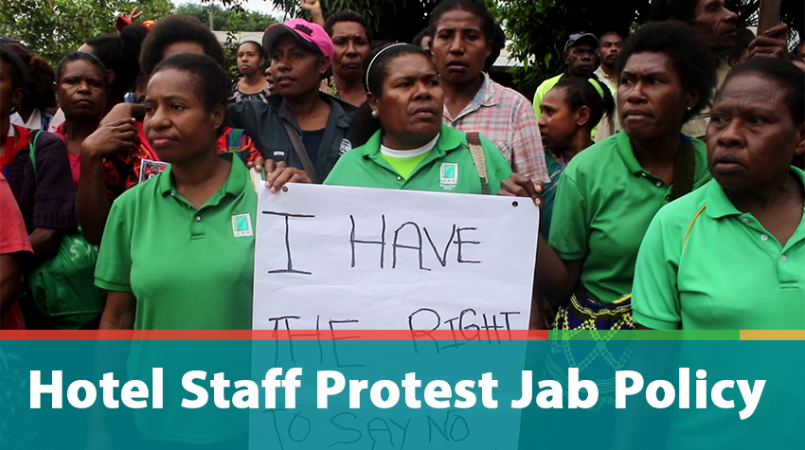 The hotel staff were supported by their colleagues at the carpentry and furniture company Philco Joinery and Lae Builders & Contractors.

This is the second protest by Lae workers against the “No jab, no job” policy. The first was carried out by the staff of Mainland Holdings Ltd.

Among the group was Tep Gasen, who was the first employee to be called on Tuesday to sign either the vaccination form or his resignation letter.

Gasen has worked at the Lae International Hotel for almost six years.

â€œOK HR gim mi taim, mi kam autsait. While mi kamaut lo em, general manager em raun painim mipla nau. (When HR gave me a few minutes to think about it, I walked out. While I was outside, the GM picked us up.)

The general manager gathered Gasen and two of his colleagues, took them into the office, and gave them five minutes to sign their resignation forms because they had refused to be vaccinated.

After being escorted out of the hotel premises, the general manager sent their photos in an internal memorandum to the guard post, saying they should not be allowed in unless he gave his approval.

While staff waited outside, business owner Sir Bob Sinclair came out to address their concerns, urging them to think about voluntary vaccination.

â€œYou are my family, I don’t want to lose anyone,â€ Sir Bob said. “I have a board meeting on September 28 where I will have a policy on incoming guests and ol wokman blo mi lo dispela sik. “

Sir Bob said those who have been forced to resign will return on Monday to sort out the issues.

It was at this time that Prime Minister James Marape and his convoy left the doors of the hotel.

The prime minister had attended the Wafi-Golpu forum in Mumeng on Thursday and was leaving for Nadzab airport when he came across the rally.