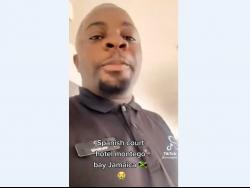 The management of the S Hotel in Montego Bay, St James rejects allegations of racism and unfair dismissal made by a former worker.

Matthew Rodney, who was employed as a bartender, made the claims in a video recording of the ordeal, which went viral on social media platforms.

Rodney alleged that he was terminated for unfair reasons.

In response, Chris Issa of Crissa Enterprises said Rodney had been at his hotel for four weeks and was on probation when he began fraternizing with guests.

He said that during orientation, Rodney was trained in the hotel mantra “Short and Sweet”, which meant that socializing with guests was not encouraged.

However, it was reported that on the day he was asked to leave the property, he was seen prancing around with trays on his head, performing for two female guests, while leaving the bar unattended.

“He was trying to impress the two guests and I just stood there at the bar watching him,” said Issa, who noted that no one else was being served.

In his video, Rodney said he served the guests and even gave one of the women something to help her with her back.

He insisted he had not acted unprofessionally when interacting with guests and claimed he was being treated unfairly.

Rodney also took issue with how he was spoken to.

Guests who were present when he taped the event expressed their support for Rodney.

In his expletive-laden tirade, he also accused hotel management of racism and suggested the owners were foreigners.

However, Issa, who was born in Jamaica and attended school here, said he never imported a manager for any of his properties.

“All of our managers, including our managing director, are black Jamaicans,” Issa said, expressing surprise at the statement.

“Having carefully reviewed reports of an incident at S Hotel Jamaica in Montego Bay on June 4, 2022 between team members, one of whom became disgruntled, involving hotel guests, we are aware of a recently published social media smear campaign,” the company said in a post on its Instagram account today.

“We share this public statement denouncing these false accusations in which this former employee brought. He sent his video to a blogger who continues to spread these vicious and harmful lies about our staff, our team and our community,” he added.

S Hotel has stated that it does not tolerate any form of discrimination or harassment against any of its employees or guests.

“We live by our values ​​by creating a strong corporate team member culture and are committed to our team, our guests and the community. One hundred percent of our team members are Jamaican and each of our employees is l backbone of our business, delivering unrivaled excellent service, the very essence for which we are highly recognized.