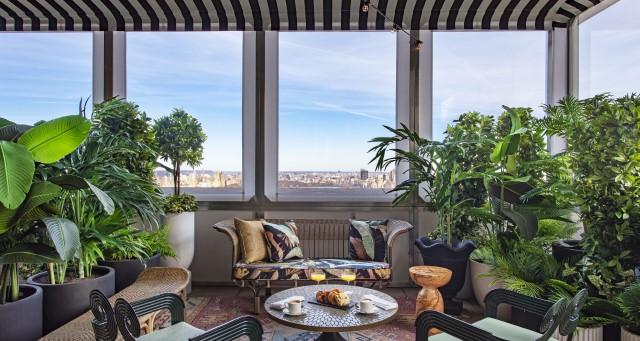 Manhattan’s bustling lodging scene has a new gem that is rapidly rising up the popularity charts, the Park Lane New York hotel, which recently debuted after a stunning and major makeover.

Managed by Highgate, a leading hotel investment and management firm, the 47-story property features 610 rooms, nearly half of which have stunning park views, with the remaining rooms boasting views of the Manhattan skyline. .

Tasked with reawakening the spirit of the iconic hotel, global design agency Yabu Pushelberg embarked on a complete overhaul of the building, invigorating the interiors to create an all-new space for guest enjoyment – ​​while carefully restoring the existing architectural details of the historic building, a unique example of the legendary post-war style of Emery Roth and Sons.

In partnership with Highgate, Scott and his team offer three unique venues: Rose Lane, an 80-seat bar with an outdoor promenade; Harry’s New York Bar, an intimate restaurant on the second floor of the hotel; and Darling, Central Park South’s only rooftop lounge atop the hotel. Perched on the 47th floor, the exclusive cocktail bar will offer guests the ultimate New York experience with the backdrop of the sprawling Manhattan skyline and park.

To learn more about the magnificent property, Traveler Host and SM Editor-in-chief James Wilkinson spoke on camera with Sanders at the hotel recently and clicked the YouTube link above to enter the gleaming establishment.